“Our AEPS thruster has demonstrated the high levels of power needed to operate the Power and Propulsion Element, and by extension, the entire Gateway,” said Aerojet Rocketdyne CEO and President Eileen Drake. “With a successful full power test complete, Aerojet Rocketdyne is ready for the next phase of our advanced electric propulsion system in support of NASA’s Artemis program.”

The Gateway’s Power and Propulsion Element is a high-power solar electric propulsion spacecraft capable of producing 60 kW – which is three times more powerful than current capabilities. Two Aerojet Rocketdyne AEPS thruster strings will be employed on the spacecraft. Each string is comprised of a Xenon Hall thruster, a power processing unit that controls the electric power to the thruster, and a Xenon flow controller which controls the flow of Xenon to the thruster.

The AEPS thruster is part of a larger Aerojet Rocketdyne AEPS development effort under contract with NASA’s Glenn Research Center. Early system integration tests for AEPS were successfully conducted last August, proving the system’s ability to successfully convert power at a high efficiency level, producing minimal waste heat. NASA aims to launch the Power and Propulsion Element in late 2022 in support of the Artemis program, which will land the first woman and next man on the Moon by 2024. 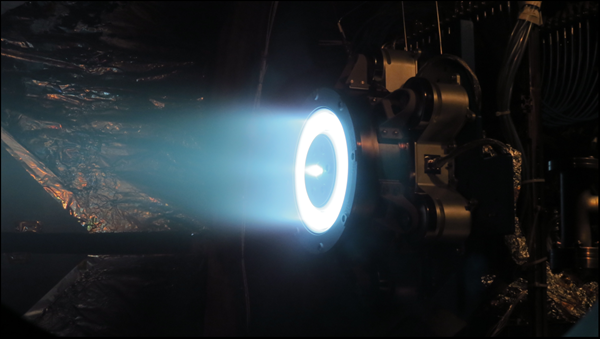