SACRAMENTO, Calif., Feb. 26, 2013 – Aerojet, a GenCorp (NYSE: GY) company, announced that yesterday afternoon, Vice President of Quality & Mission Assurance, Lee Tait, presented a check for $100,000 to the board of the Powerhouse Science Center as part of its $1.5 million commitment toward creation of the new Aerojet Challenger Learning Center in Sacramento.

In December 2011, Aerojet became the first title sponsor of the planned Powerhouse Science Center (www.powerhousesciencecenter.org), the new home of the Discovery Museum Science & Space Center set to break ground later in 2013 and open its doors in 2015.

“Aerojet’s unique partnership with the Discovery Museum goes back more than 17 years and highlights the company’s continuing commitment to STEM (science, technology, engineering and mathematics) education and to the Sacramento community,” said Aerojet President Warren M. Boley, Jr. “The new Powerhouse Science Center will be a science and technology jewel for the region and I’m excited about the huge impact our expanded, high-tech Challenger Learning Center will make in inspiring future generations.”

“Since 1997, Aerojet has taken the lead role in supporting our highly successful Challenger Learning Center,” said Michele Wong, board president of Powerhouse Science Center. “Their longstanding support and generosity makes a positive impact on the quality of STEM education throughout our region.”

Shortly after the loss of NASA’s Space Shuttle Challenger and its seven crew members in January 1986, the astronauts' families established the national Challenger Center for Space Science Education in honor of their loved ones to inspire students to continue their space exploration mission. 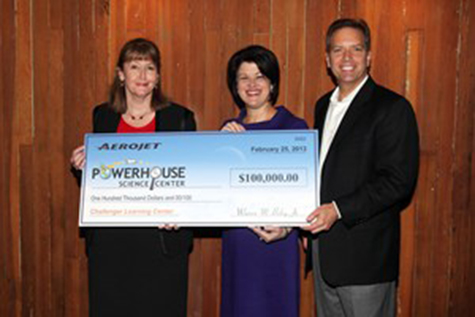 Since its opening in October 1997, more than 60,000 students have participated in 2,300 simulated space missions at Aerojet’s Challenger Learning Center.

The new Aerojet Challenger Learning Center will showcase a cutting-edge simulated NASA space mission program, the most advanced in the nation, and serve as a cornerstone of the future Powerhouse Science Center. Once completed, the new science complex is expected to draw approximately 500,000 visitors a year.

Aerojet is a world-recognized aerospace and defense leader providing propulsion and energetics to the space, missile defense, strategic, tactical missile and armaments areas in support of domestic and international markets. GenCorp is a leading technology-based manufacturer of aerospace and defense products and systems with a real estate segment that includes activities related to the entitlement, sale, and leasing of the company’s excess real estate assets. Additional information about Aerojet and GenCorp can be obtained by visiting the companies’ websites at http://www.Aerojet.com and http://www.GenCorp.com.