SACRAMENTO, Calif., Feb. 11, 2010 – Aerojet, a GenCorp (NYSE: GY) company, announced its key role in the positioning of NASA’s Solar Dynamics Observatory (SDO) satellite which was launched aboard the Atlas V on Feb. 11 from Cape Canaveral Air Force Station, Fla. SDO is the first mission to be launched for NASA's Living With a Star (LWS) Program and will help scientists understand the Sun's influence on Earth and Near-Earth space by studying the solar atmosphere in detail.

The SDO satellite carries a single Aerojet 100 lbf bipropellant apogee engine that will move the spacecraft from the launch vehicle drop-off point to its final position in an inclined geosynchronous orbit. The orbital slot was chosen to allow continuous observations of the Sun and to relay them to a single dedicated ground station. 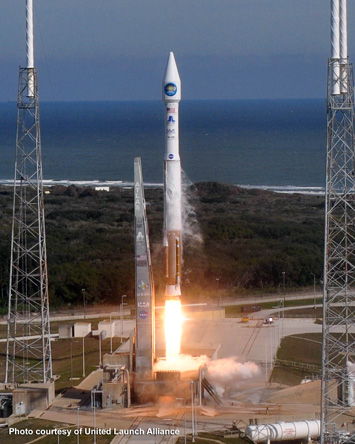 Aerojet is a world-recognized aerospace and defense leader principally serving the missile and space propulsion, defense and armaments markets. GenCorp is a leading technology-based manufacturer of aerospace and defense products and systems with a real estate segment that includes activities related to the entitlement, sale, and leasing of the company’s excess real estate assets. Additional information about Aerojet and GenCorp can be obtained by visiting the companies’ Web sites at http://www.Aerojet.com and http://www.GenCorp.com.