“Aerojet Rocketdyne has continued to refine the reusable engine technology we originally developed for the Space Shuttle program,” said Eileen Drake, Aerojet Rocketdyne CEO and president. “With the AR-22 we are taking reusability to the next level and have demonstrated that daily, affordable access to space is within reach.”

The highly anticipated test sequence was carried out as part of the collaboration between Boeing [NYSE:BA] and the U.S. Defense Advanced Research Projects Agency (DARPA) on the Experimental Spaceplane program. Boeing is designing and developing the Phantom Express spaceplane for this program and the successful engine test results will help improve the spaceplane’s design.

“Phantom Express is a disruptive, reusable launch system. Successfully completing this highly demanding rocket engine test series validated a new level of booster capability for this transformational launch vehicle,” continued Drake. “Turning the AR-22 within 24 hours repeatedly over 10 days demonstrates the capability of this engine and the ability to enable rapid, responsive access to space.”

On Tuesday, July 3, DARPA director Steve Walker visited NASA Stennis Space Center to view one of the engine tests. He complimented the team on their support of national security, highlighting their demonstration of the importance of the speed of relevance.

The liquid-oxygen and hydrogen-fueled AR-22 engine, capable of generating more than 375,000 pounds of thrust, fired at full throttle during the tests, each lasting at least 100 seconds in duration. After each firing, Aerojet Rocketdyne technicians carried out pre-planned inspections and data reviews in preparation for the next test.

“Aerojet Rocketdyne is very proud to have such an important role in a program that could literally revolutionize space access with a vehicle capable of launching on a daily basis,” Drake added. “With the Defense Department and commercial sector anticipating a shift toward constellations of smaller satellites that can be replenished quickly, the Phantom Express is the right program at the right time for the nation.”

The Phantom Express spaceplane is designed to launch vertically and land horizontally to allow for aircraft-like operations in support of the U.S. government’s resilient space vision and commercial missions. The vehicle will be equipped with an expendable second stage capable of placing up to 3,000 pounds or 1,361 kg of payload into low Earth orbit. 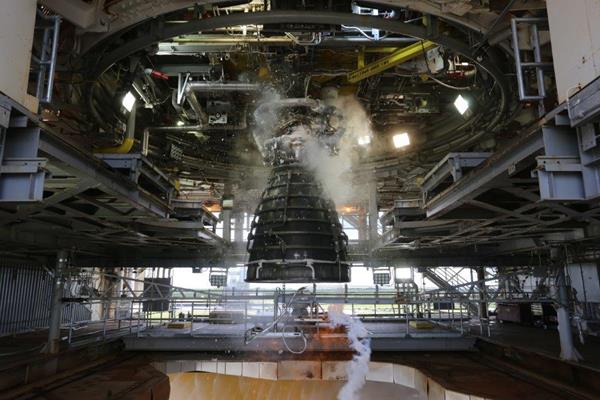 The AR-22 engine built by Aerojet Rocketdyne during hot-fire testing at NASA Stennis on June 27, 2018. The engine was built for Boeing as part of the U.S. Defense Advanced Research Projects Agency Experimental Spaceplane program. This new Boeing spaceplane, called Phantom Express, is intended to demonstrate a new paradigm for more routine, responsive and affordable space access. Photo courtesy of NASA. 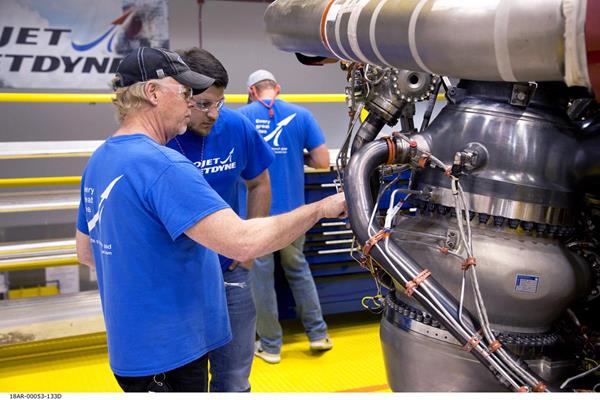