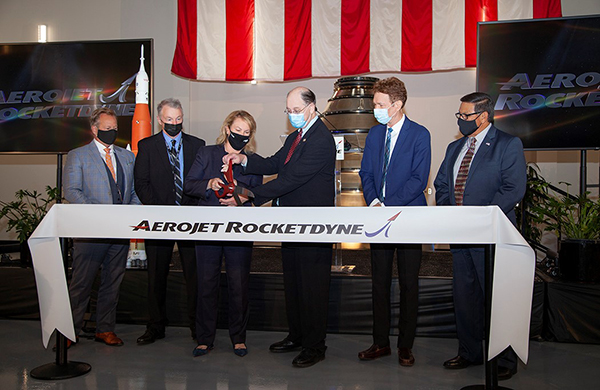 LOS ANGELES, Aug. 18, 2021 (GLOBE NEWSWIRE) -- Aerojet Rocketdyne has finished a major expansion of its Los Angeles facility to support production of new-generation RS-25 main engines for NASA’s Space Launch System (SLS), which will send astronauts to the Moon as early as 2024.

On Aug. 18, Drake and members of her leadership team hosted a ribbon cutting to mark completion of the $59 million expansion, which added 30,000 square feet of manufacturing space to the facility. Attendees at the ceremony included California Congressman Brad Sherman, NASA Liquid Engines Manager Johnny Heflin and other federal, state and local dignitaries.

“The San Fernando Valley has a rich history of being at the forefront of aerospace innovation. Aerojet Rocketdyne’s work to produce RS-25 engines continues that tradition and will usher in a new age of human space exploration. I welcome this significant investment in manufacturing space and the creation of new jobs right here in the Valley,” said Rep. Brad Sherman, D-Calif.

Aerojet Rocketdyne’s Los Angeles facility is located a few miles away from where the company originally produced some of the iconic propulsion systems for America’s space program. These include the Mercury-Redstone A-7 engine that launched the first U.S. astronaut into space, the fully reusable Space Shuttle Main Engine and the majority of the engines for the Apollo missions, most prominently, the F-1 engines that powered the first stage of NASA’s Saturn V moon rocket, and the J-2 engines that powered the second and third stages.

With its unprecedented power and lift capabilities, NASA’s SLS will launch crews of up to four astronauts aboard the agency’s Orion spacecraft. Together, SLS and Orion are the foundational hardware elements of NASA’s Artemis program, which will put the first woman and first person of color on the Moon. Each SLS first stage will be powered by four RS-25 engines generating more than two million pounds of combined thrust.