“All of our propulsion systems, including the SLS first- and second-stage engines, performed magnificently today,” said Eileen P. Drake, Aerojet Rocketdyne CEO and president. “I want to offer my heartfelt congratulations to NASA for bringing the world’s most powerful rocket into service and look forward to the successful completion of the Artemis I mission.”

In total, Aerojet Rocketdyne provided 39 propulsive elements for the Artemis I mission (38 liquid engines and one solid rocket motor), as well as 14 high pressure tanks.

Artemis I is the first in a series of missions that will lead to the return of astronauts – including the first woman and first person of color – to the lunar surface and establish a sustained human presence on and around the Moon. During the 25-day Artemis I mission, Orion will enter into a lunar distant retrograde orbit before returning to Earth and splashing down in the Pacific Ocean for recovery.

SLS and Orion are the foundational elements for the Artemis missions, which will help pave the way for human missions to Mars. Both systems rely on Aerojet Rocketdyne propulsion, continuing the company’s rich legacy of supporting NASA’s human spaceflight endeavors, including the Apollo, Space Shuttle and International Space Station programs.

The Artemis era got underway in earnest in the early morning hours when the rocket’s four shuttle-derived RS-25 core-stage engines, built and upgraded by Aerojet Rocketdyne, roared to life, helping the massive SLS rocket lift off from Launch Complex 39B. The liquid oxygen and liquid hydrogen-powered engines, generating 500,000 pounds of thrust each, performed flawlessly during their prescribed burn of 8 minutes and 2 seconds.

Not quite halfway through that burn, and shortly after separation of the SLS’s twin solid rocket boosters, the Orion Launch Abort System’s (LAS) Jettison Motor ignited. Generating 40,000 pounds of thrust, the Jettison Motor separated the LAS from Orion, allowing the spacecraft to continue its journey into space. The Jettison Motor is the only LAS motor that fires in both successful launch and abort scenarios.

Following core stage separation and a roughly 40-minute coast phase, the SLS’s Interim Cryogenic Propulsion Stage (ICPS), powered by an Aerojet Rocketdyne-built RL10B-2 engine generating 24,750 pounds of thrust, took over, performing the first of two planned burns to put Orion in a stable orbit above Earth. The RL10, variants of which have been flying since the 1960s, is the world’s most reliable upper-stage engine and is used for multiple government and commercial missions. The ICPS also features 12 Aerojet Rocketdyne-built MR-106 reaction control system thrusters providing pitch, yaw and roll control for the upper stage, as well as settling burns. Eight composite overwrapped pressure vessels (COPVs) produced by Aerojet Rocketdyne’s ARDÉ subsidiary also support operation of the stage.

The second ICPS firing occurred about an hour and a half after liftoff and lasted for about 18 minutes, propelling Orion out of Earth’s orbit and on its way to cislunar space. After another brief coast period, the SLS portion of the mission came to an end as Orion and its service module separated from the ICPS to continue on toward the Moon.

Upon splashdown, Orion will deploy its self-righting flotation system which will be inflated with helium stored in five COPVs. This system will enable crews on future missions, beginning with Artemis II, to safely exit Orion after splashdown. ARDÉ also supplied a single nitrogen tank that pressurized Orion’s crew module. 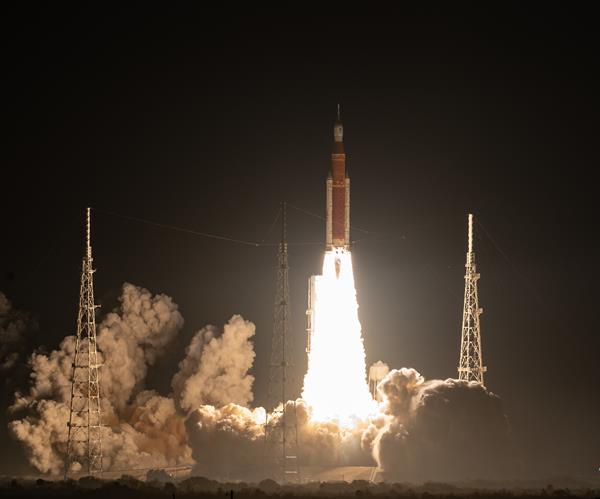