“Weather is constantly changing, and the faster scientists can predict those changes, the better communities can prepare for severe conditions and phenomena, such as forest fires and volcanic ash. Aerojet Rocketdyne is honored to help launch this critical satellite that will help keep people and their neighborhoods safe,” said Aerojet Rocketdyne CEO and President Eileen Drake.

After separation of the first stage, a single RL10C-1 upper-stage engine ignited to place the payload into orbit, with the RCS thrusters maintaining vehicle orientation and the pressurization tanks maintaining pressure levels in the liquid oxygen/liquid hydrogen tanks. The RL10C-1 delivers 22,890 pounds of thrust to power the Atlas V upper stage, using cryogenic liquid hydrogen and liquid oxygen propellants during its operation.

The RL10C-1 was developed from the RL10 family of upper-stage engines, which have accumulated one of the most impressive track records of accomplishments in the history of space propulsion. More than 470 RL10 engines have supported launches over the last 50 years, helping to place military, government and commercial satellites into orbit, and powering scientific space-probe missions on every planetary mission in our solar system.

Aerojet Rocketdyne developed a new MR-401 Low Thrust Rocket (LTR) for the GOES-R program that enables compliance with the unique GOES-R mission requirements. The GOES-R satellite has 16 of these MR-401 rockets onboard providing vehicle attitude control, momentum wheel desaturation and east/west stationkeeping. In addition to the 16 LTRs, Aerojet Rocketdyne also provided the 4.4kW MR-510 electric propulsion subsystem which provides all north/south stationkeeping for the GOES-R mission, as well as end of life decommissioning. The MR-510 Electric Propulsion (EP) subsystem consists of four MR-510 Arcjet thrusters, one 4.4kW Power Conditioning Unit (PCU), and the electrical harnessing to connect the PCU to the thrusters. The MR-510 EP system enables increased payload capability for the GOES-R mission due to the significant savings in propellant mass provided by the 3x improvement in fuel efficiency.

ARDÉ, a subsidiary of Aerojet Rocketdyne based in New Jersey, provided the pressure vessels on the first and second stages of the launch vehicle.

Built by Lockheed Martin, the GOES-R is a four-satellite program (GOES-R/S/T/U) and is a collaborative development and acquisition effort by NOAA and NASA. GOES-R will provide continuous imagery and atmospheric measurements of Earth's Western Hemisphere and space weather monitoring, resulting in more timely and accurate weather forecasts. It will improve support for the detection and observations of meteorological phenomena and directly affect public safety, protection of property, and ultimately, economic health and development. In addition to GOES-R, Aerojet Rocketdyne provides the same complement of flight hardware to GOES-S, GOES-T and GOES-U. 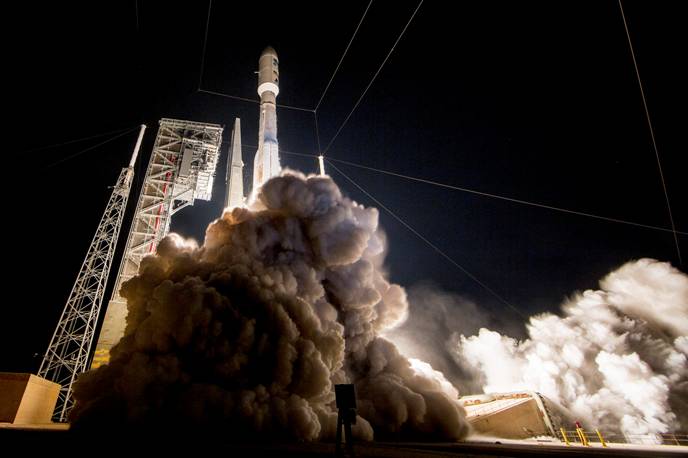