"Traveling to an asteroid, capturing a sample and returning that sample to Earth, is a propulsion-intensive mission that requires an unprecedented quantity and variety of propulsion devices to accomplish," said Aerojet Rocketdyne's CEO and President Eileen Drake. "We are honored to be chosen to provide all of the propulsion devices on the OSIRIS-REx spacecraft, and we look forward to enabling the safe return of samples from this unexplored celestial body."

Built by Lockheed Martin, OSIRIS-REx is the third planetary science mission selected under NASA's New Frontiers Program, after Juno and New Horizons, all of which include Aerojet Rocketdyne propulsion.

Aerojet Rocketdyne's contribution to the OSIRIS-REx launch began when a single AJ-60A SRB ignited to provide additional thrust to the Atlas V rocket. The 67-foot long motor case contains more than 90,000 pounds of propellant, providing an average of 250,000 lbf of thrust. All Atlas V launches requiring extra boost have flown Aerojet Rocketdyne produced SRBs, which have achieved a 100 percent success record in flight since their inaugural launch in July 2003, more than 13 years ago. After the upper stage separated from the rocket, a single Aerojet Rocketdyne RL10A-4-2 upper-stage engine ignited to place the payload on its path toward the asteroid, helped by the Centaur RCS thrusters and pressurization tanks. The RL10A-4-2 engine delivers 22,300 pounds of thrust to power the Atlas V Centaur upper stage, using cryogenic liquid hydrogen and liquid oxygen propellants during its operation.

The RL10A-4-2 was developed from the RL10 family of upper-stage engines, which have accumulated one of the most impressive track records of accomplishments in the history of space propulsion. More than 470 RL10 engines have supported launches over the last 50 years, helping to place military, government and commercial satellites into orbit, and powering scientific space-probe missions to every planet in our solar system.

Aerojet Rocketdyne propulsion is involved in every phase of the mission, including the Earth-departure phase to fine tune the Earth escape velocity; the cruise phase to adjust trajectory and ensure a perfectly accurate trajectory for the Earth swing-by and arrival at Bennu. The arrival phase at Bennu involves an array of thrusters to complete the complex task of modifying the spacecraft velocity and trajectory to perfectly match with that of Bennu. The two-year-long survey and mapping phase requires maneuvering around the full circumference of Bennu and will culminate with the selection of a sample site. The sample phase requires the maneuvering of the spacecraft to the precise sample site, taking the sample and maneuvering away from the asteroid. The return phase requires the firing of the MR-107 thrusters to leave Bennu with a speed of 716 mph, placing OSIRIS-REx on a ballistic trajectory that intersects the orbit of the Earth in September 2023. The final maneuver will involve steering the spacecraft away from Earth after the sample re-entry capsule has been jettisoned and placing the spacecraft into a stable orbit around the sun.

It will take OSIRIS-REx approximately two years to reach Bennu, where it will map the asteroid surface and identify a site to collect a small sample. Once a site is located, the spacecraft will move closer to the asteroid, and a robotic arm will be extended to collect between 60 and 2,000 grams (2.1 to 70 ounces) of material from Bennu's surface. Afterward, the spacecraft will bring the sample back to Earth in 2023. OSIRIS-REx will be the first U.S. mission to carry a sample back from an asteroid. Bennu is roughly 1,600 feet in diameter, or about the size of five football fields. Scientists think the asteroid is rich in carbon, a key ingredient in the organic molecules necessary for life. According to NASA, the sample could better explain our solar system's formation and how life began.
NASA's Goddard Space Flight Center in Greenbelt, Maryland, manages the project for the principal investigator, Dr. Dante Lauretta of the University of Arizona.

Aerojet Rocketdyne played a critical role in placing NASA's Juno spacecraft into orbit on July 4, 2016 to study Jupiter. Juno is the first mission dedicated to the study of the planet's interior to learn more about its origins, structure, atmosphere and magnetosphere. Aerojet Rocketdyne provided 26 propulsion devices and six pressurant tanks aboard the Atlas V rocket during its 2011 launch, as well as 12 propulsion devices on the spacecraft during its five-year journey through space. More: http://bit.ly/29VQZne

Aerojet Rocketdyne also played a critical role in the historic flyby of Pluto and its five known moons with NASA's New Horizons spacecraft, which has traveled nearly three billion miles in just under 10 years to reach the dwarf planet on July 14, 2015. New Horizons is the first spacecraft to ever make a close study of Pluto and has already returned images of the system that are of higher quality than those taken by any space telescope. Aerojet Rocketdyne provided 43 propulsion devices and six pressurant tanks aboard the Atlas V launch vehicle and propulsion system for the spacecraft. More: http://bit.ly/1IPBucp 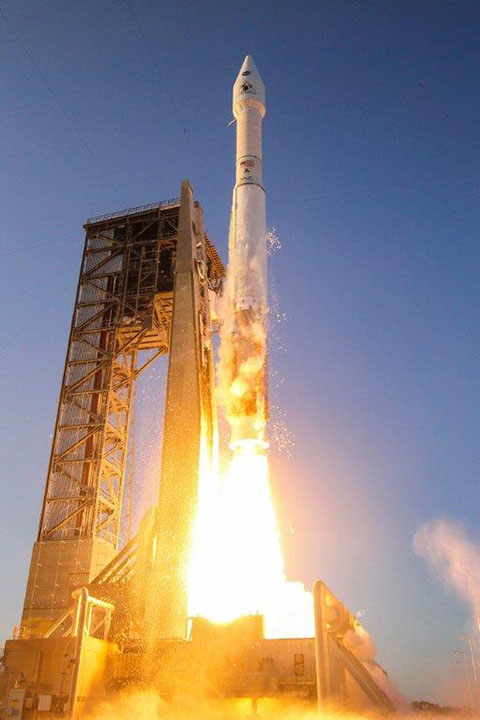