"Aerojet Rocketdyne is honored to have powered this critical spacecraft into orbit for the U.S. Air Force," said Steve Bouley, vice president of Space Launch Systems at Aerojet Rocketdyne. "The seamless integration of our propulsion systems, from launch to orbit insertion, culminated in another successful launch." 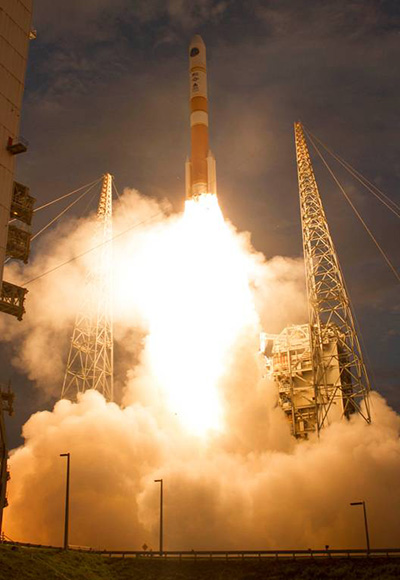 During launch, the rocket was boosted off the pad by the RS-68A – the world’s most powerful liquid-hydrogen/liquid-oxygen booster engine, which provides 702,000 pounds of liftoff thrust. Beginning with this launch, Aerojet Rocketdyne’s upgraded RS-68A engine, which features increased thrust and improved combustion efficiency, will now power all future Delta IV medium and Delta IV Heavy rockets for ULA. The RS-68A’s predecessor, the RS-68 engine, has been “retired” after 28 successful missions (42 engines total) with 100-percent mission success.

After the upper-stage separated from the launch vehicle, a single RL10B-2 engine ignited to provide 24,750 pounds of thrust to power the upper stage into orbit. For more than five decades, the RL10 has been one of the United States’ most reliable upper-stage engines, accumulating one of the most impressive lists of accomplishments in the history of space propulsion. It has played an integral role in placing numerous military, government and commercial satellites into orbit, and powering space-probe missions to nearly every planet in the solar system.

The Boeing-built WGS satellites are part of a larger system that increases military communications capabilities for U.S. and allied forces deployed worldwide. They help support the exchange of information, execution of tactical command and control, intelligence, surveillance and reconnaissance.