EL SEGUNDO, Calif., May 04, 2020 (GLOBE NEWSWIRE) -- Aerojet Rocketdyne announced today that Amy Gowder will join the company on May 4, 2020, as Chief Operating Officer (COO). Gowder will report directly to CEO and President Eileen Drake and will serve as one of the officers of parent company Aerojet Rocketdyne Holdings, Inc. (NYSE: AJRD). Gowder will replace current COO Mark Tucker who has decided to retire at the end of this year. Mark will work with Amy to ensure a seamless transition and continue to work with Eileen on enterprise-wide initiatives. 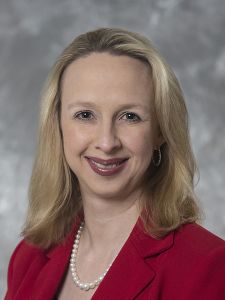 “I am delighted that Amy will join Aerojet Rocketdyne as our new Chief Operating Officer. She is a proven leader with broad experience across our industry,” said Drake. “Amy will play an important role in executing our growth strategy, optimizing performance and increasing customer and shareholder value as Aerojet Rocketdyne continues to push the boundaries of space exploration and expands our nation’s defense capabilities.”

Gowder brings more than 20 years of leadership experience in the aerospace and technology sector. She most recently served as vice president and general manager for Lockheed Martin’s Training and Logistics Solutions line of business within the Rotary and Mission Systems business area.

In her new role with Aerojet Rocketdyne, Gowder will lead the company’s Centers of Excellence with a focus on ensuring that they deliver value to customers and shareholders, continuously improve, and strengthen Aerojet Rocketdyne’s world-class operations.

Gowder is a proven leader who was named a “Top 40-Under-40 Aviation Executive” by Aviation Week in 2012 and was inducted into the San Antonio Women’s Hall of Fame in 2015. Amy has served on multiple advisory boards, committees and task forces in the states of Texas and Florida, advising on aerospace and defense as well as economic development topics. She is a graduate of the Massachusetts Institute of Technology Sloan Fellows Program with a Master of Business Administration. She holds a Bachelor of Science in Bioengineering from Arizona State University.

“I would like to thank Mark for his tremendous contribution to Aerojet Rocketdyne and congratulate him on his upcoming retirement after nearly 40 years in the aerospace industry,” said Drake. “Mark played a pivotal role in ensuring the successful execution of our business and leading the implementation of our successful Competitive Improvement Program (CIP).” Tucker joined the company in 2013 as senior vice president of Enterprise Operations and Engineering and was named COO in 2015.