STENNIS SPACE CENTER, Miss., July 25, 2017 (GLOBE NEWSWIRE) -- Aerojet Rocketdyne, a subsidiary of Aerojet Rocketdyne Holdings, Inc. (NYSE:AJRD), successfully tested its third RS-25 engine flight controller today at NASA's Stennis Space Center in Mississippi. The RS-25 engine will propel America's next-generation heavy lift rocket, the Space Launch System (SLS), into space. The flight controller tested today is slated to fly on the inaugural mission of the SLS which will propel the Orion capsule around the Moon and safely return it back to Earth.

"The Space Launch System is the rocket that will take humans beyond the Moon, and ultimately to Mars," said Aerojet Rocketdyne CEO and President Eileen Drake. "Evaluating the engine's flight controller under multiple conditions is one way we are ensuring that we are providing a safe, reliable engine to the nation for its deep space exploration efforts."

The flight controller translates the vehicle's commands into action while monitoring the health of the engine by making real-time adjustments to the speed of the turbopumps, combustion pressures, as well as the engine's thrust and propellant mixture ratios. Today's test focused on the engine thrust and mixture ratio precision operation.

"Achieving the optimum thrust and mixture ratio is crucial for creating an extremely efficient rocket engine," added Dan Adamski, RS-25 program director at Aerojet Rocketdyne. "The RS-25 is the most efficient booster engine in the world, which is why it is the right engine for human exploration of deep space."

Four RS-25 engines power the core stage of the SLS for 8½ minutes to help the SLS during its climb to space; combined, the engines provide the rocket with more than two million pounds of thrust. The SLS rocket provides an unmatched capability to launch the heaviest and largest payloads faster to any destination when compared with other existing or proposed launch vehicles in development, making it the ideal rocket to explore deep space. 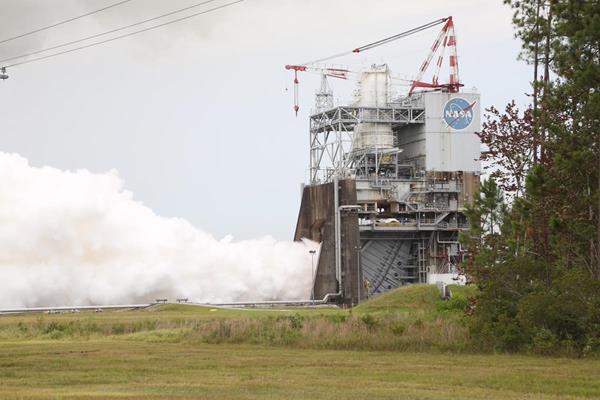