The injector has performed exceptionally well to date, verifying the engine’s combustion stability and additionally providing chamber wall heat flux and injector performance data to anchor mathematical models. All testing is being performed in heavy-weight combustion chambers specifically designed for these tasks. This early demonstration of the engine’s combustion stability at expected Orion operating conditions is being conducted to retire risk to the Orion vehicle.

The OME injector combines the reliability and combustion stability of the OMS-E injector with current Aerojet best practices in design and manufacturing to reduce process variability affecting injector performance and cost for the Orion program. The OME injector is a diffusion-bonded platelet device with the same injector element type, face pattern layout, and element quantity as the OMS-E, but with improvements in the injector body design and platelets to provide more uniform flow to the injector elements.

The current Aerojet platelet manufacturing capability results in significantly less dimensional variability than was possible for the OMS-E, enabling improved uniformity of propellants injected into the combustion chamber. The improvements in injection uniformity are also expected to result in improved nominal and minimum vacuum specific impulse for the OME.

The OME will provide thrust for events requiring large velocity changes such as Earth orbital insertion, translunar/trans Earth injection, Earth de-orbit, and emergency thrust for high-altitude abort scenarios. Orion’s engine complement also includes 16 25-pound thrust engines and eight 100-pound-thrust bipropellant engines for the Orion service module. Additionally, Aerojet supplies 12 160-pound-thrust monopropellant thrusters for the Orion crew module. Aerojet is providing all of the engines for the Orion spacecraft which is comprised of a crew module for crew and cargo transport, and a service module for propulsion, electrical power and fluids storage. Risk reduction testing of critical subsystems has been ongoing throughout Orion’s development phase to maximize mission success and crew safety.

Lockheed Martin is the prime contractor to NASA for the Orion spacecraft, which is being developed as the nation’s next generation spacecraft for future human exploration throughout our solar system. Aerojet is part of the nationwide Orion industry team led by Lockheed Martin, which includes five major subcontractors and an expansive network of minor subcontractors and small businesses working at 88 facilities in 28 states across the country.

Aerojet is a world-recognized aerospace and defense leader principally serving the missile and space propulsion, defense and armaments markets. GenCorp is a leading technology-based manufacturer of aerospace and defense products and systems with a real estate segment that includes activities related to the entitlement, sale, and leasing of the company’s excess real estate assets. Additional information about Aerojet and GenCorp can be obtained by visiting the companies’ Web sites at http://www.Aerojet.com and http://www.GenCorp.com. 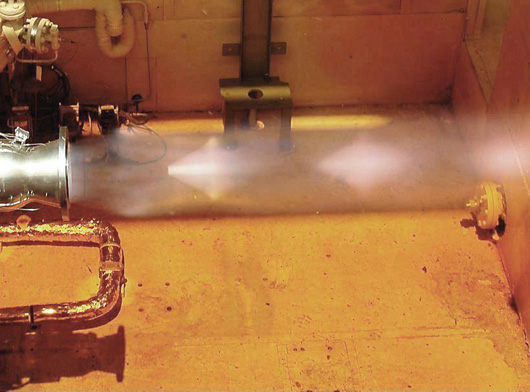