SACRAMENTO, Calif., May 12, 2017 (GLOBE NEWSWIRE) -- Aerojet Rocketdyne, a subsidiary of Aerojet Rocketdyne Holdings, Inc. (NYSE:AJRD), successfully completed its test campaign of a fuel boost kick pump at its Sacramento, California, facility as part of the U.S. Air Force Research Laboratory (AFRL) Hydrocarbon Boost Technology Demonstrator (HBTD) program. This device, as part of the engine turbomachinery, is the first full-scale engine component to be tested on the program. Aerojet Rocketdyne tested the pump units at full power to provide key insights for future engines that use the oxygen-rich staged combustion (ORSC) engine cycle.

"Throughout testing last fall we steadily increased the speed of the pump; starting with bump tests to verify the pump was behaving as we predicted," said Joe Burnett, Aerojet Rocketdyne program manager of the Hydrocarbon Boost Technology Demonstrator program. "We've now successfully operated the device multiple times at full power, which is over 75,000 rpm; the fastest speed for any hydrocarbon pump to date. The sheer amount of data being gathered will help the rocket engine community better understand this pump, and its capabilities, when integrated into the turbomachinery assembly in the near future. Having completed testing on two units also gives us some insight to pump-to-pump variability as well."

The HBTD program is developing key technologies for rocket engines that employ an ORSC engine cycle - the same cycle that is used for the Aerojet Rocketdyne AR1 engine - a potential replacement engine for the Russian RD-180. The reusable HBTD demonstrator engine is a 250,000 lbf thrust class engine that is capable of up to 100 flights, and features high-performance, long-life technologies and modern materials.

"Evolving rocket science is what we do best at Aerojet Rocketdyne, and the Hydrocarbon Boost Technology Demonstrator program is key to enabling our country to demonstrate a state-of-the-art ORSC engine with components that include modern materials that are built using advanced manufacturing techniques," said Eileen Drake, Aerojet Rocketdyne CEO and president. "What we've learned through this program will be instrumental as other engines, such as our AR1 engine, are developed using this same engine cycle."

"Using the Cryogenic Rocket Engine Simulation Tool Modified code originally developed under AFRL's Upper Stage Engine Technology program, we've been able to accurately predict the behavior of the device, reducing risk as we increase our speeds," added Burnett. "We're putting to use government investments from one program and showing its versatility on another; saving money and schedule while also reducing risk to such a high-speed and high-performance device."

The AFRL Rocket Lab is the singular space and missile propulsion R&D organization for the Air Force. As part of the Aerospace Systems directorate of AFRL, its mandate is to lead, discover, develop and transition rocket propulsion technologies to the Air Force, industry, and the Nation to maintain the U.S.'s space supremacy. Performing activities from basic research through in-house work and academia up to full scale technology demonstrators through R&D contracts, the AFRL Rocket Lab pursues technology solutions to current and future challenges http://www.wpafb.af.mil/afrl/rq. 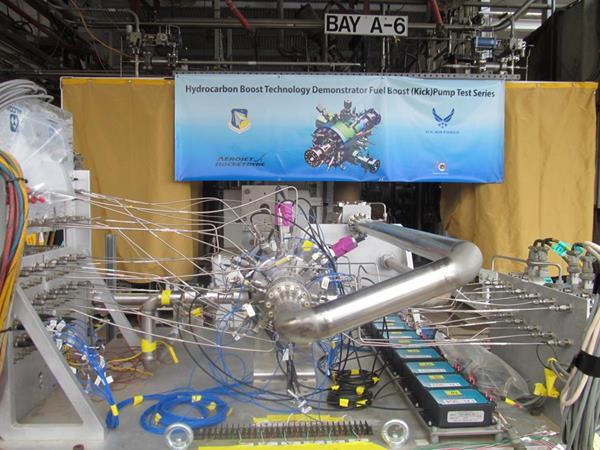