HUNTSVILLE, Ala., Sept. 16, 2015 (GLOBE NEWSWIRE) -- The Dynetics and Aerojet Rocketdyne (NYSE:AJRD) team recently performed with its NASA partner, the second successful gas generator test series of the F-1 engine as part of the Space Launch System (SLS) Advanced Booster Engineering Demonstration and/or Risk Reduction (ABEDRR) contract. This test series was unique, however, in that a key component of the gas generator was built using additive manufacturing - or 3-D printing - techniques. At 30,000 pounds, the component is among the highest thrust levels ever demonstrated for a 3-D printed part. 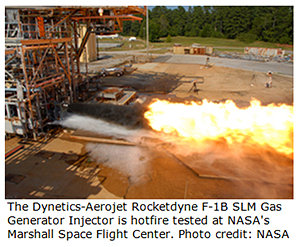 NASA awarded the ABEDRR contract in the fall of 2012 to reduce risks for advanced boosters that could help meet SLS's future capability needs. The team has performed a wide-ranging set of full-scale, system-level demonstrations on key advanced booster systems. Dynetics, the prime contractor, designed and fabricated a full-scale cryogenic tank that it tested last month to verify the structural design.

Aerojet Rocketdyne has applied state-of-the-art manufacturing methods to the Apollo-era F-1 rocket engine to demonstrate that a proven design can be built at a competitive cost. Among the new fabrication methods used was Selective Laser Melting (SLM), an additive manufacturing technique that has shown the potential for dramatically reducing cost and schedule for building rocket engine parts. SLM was used to build an F-1-based gas generator injector on the ABEDRR program.

In 2013, an F-1 gas generator made with 1960s-era parts was tested at new conditions to verify its applicability to the NASA SLS requirements. Testing the 3-D printed gas generator provided an opportunity for a one-to-one comparison of a part built with traditional manufacturing to a part built with the SLM process. The two test series were highly successful and the results were nearly identical, giving confidence in the new, lower-cost manufacturing methods.

The F-1 engine gas generator testing, as well as other recent tests with 3-D printed parts, is helping NASA and the aerospace industry gather data on these new manufacturing processes.

Dynetics CEO David King said, "The successful testing of this technology lays the groundwork for future rocket engine development - both for NASA and for others who want the most affordable space solutions."

Andy Crocker, ABEDRR program manager at Dynetics, said, "This test series is further proof that our team has been able to take successful designs from the past and apply the latest manufacturing methods to create the best of both worlds - a low-cost, proven engine component."

Crocker also said, "I want to compliment the test team from NASA Marshall and Aerojet Rocketdyne on this effort. They were prepared and efficient. They built on previous work in this area to quickly and effectively bring the tests to fruition."

Dynetics provides responsive, cost-effective engineering, scientific, and IT solutions to the national security, cybersecurity, satellite, launch, automotive and critical infrastructure sectors. Our portfolio features highly specialized technical services and a range of software and hardware products, including components, subsystems and complex end-to-end systems. The company of 1,400+ employee/owners is based in Huntsville, Alabama, and has offices throughout the U.S. For more information, visit www.dynetics.com.