“This rocket will take humans farther and faster into the solar system than we have ever traveled and increase our capability of making exciting new discoveries by launching large astronomical observatories and other scientific missions,” said Eileen Drake, Aerojet Rocketdyne CEO and president.

Aerojet Rocketdyne is the prime contractor for the RS-25 core stage engines that will be used to propel SLS on its eight-minute climb into space. Engine E2059 is slated to fly on the bottom of the core stage of SLS on its second flight, planned for 2021. Four other flight engines will undergo stage testing by late 2017 in preparation for the inaugural Exploration Mission-1 launch in 2018.

“It is always a good day at NASA and Aerojet Rocketdyne when you feel the rumble of the Earth as the RS-25 engine comes to life,” said Drake. “This test is the first test of the new controller on a flight engine, demonstrating true adaptability and continuation of technology insertions for this workhorse engine.”

In addition to testing the new controller, numerous other test objectives were successfully conducted, including testing of a rebuilt high pressure fuel turbopump, calibration of facility and engine flowmeters, and testing in conditions replicating flight environments.

Last year, Aerojet Rocketdyne completed more than 3,700 seconds of testing on the first RS-25 development engine to confirm that the engines can withstand the demanding operating conditions of flight, as well as the performance of the new controller. These engines must operate in a temperature extreme from negative 423 degrees Fahrenheit to 6,000 degrees Fahrenheit and at pressures exceeding 7,000 pounds per square inch.

“Mission success is our driving factor, which is why testing each engine is critical to ensure the safety of the astronauts and cargo that will fly on SLS,” added Drake. 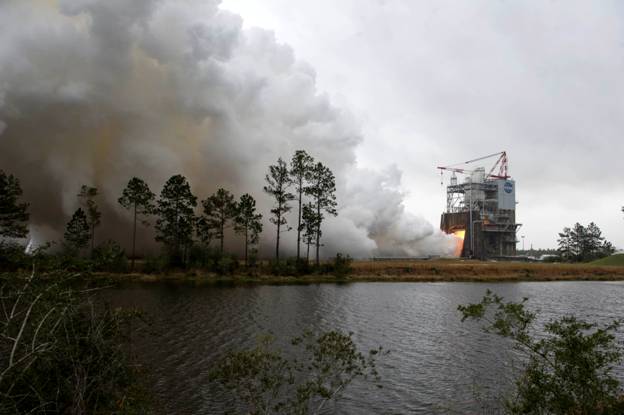