"GPIM is the culmination of excellent teamwork between NASA, the Air Force, Ball Aerospace and Aerojet Rocketdyne," said Julie Van Kleeck, vice president of Advanced Space and Launch Programs at Aerojet Rocketdyne. "This propulsion system delivery marks the success of more than 10 years of research and development. Following extensive testing, we ended up with a propulsion design using a new, green monopropellant, which will fly into orbit in 2016. The mission will demonstrate the use of this American-made green propellant for multiple applications - a key objective." 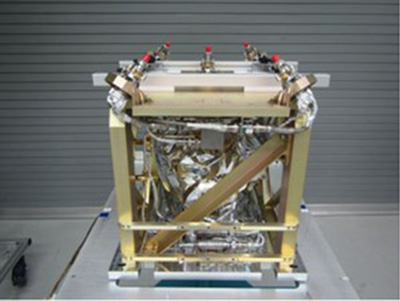 "This is a critical milestone for the GPIM program that will be a game-changer for how we travel in and through space," said Jim Oschmann, vice president and general manager of Civil Space and Technology at Ball Aerospace. "This new technology offers longer mission durations, additional maneuverability, increased payload space and simplified launch processing for future spacecraft."

The green propellant propulsion subsystem, built by Aerojet Rocketdyne in Redmond, Washington, consists of a propellant tank and five 1-newton thrusters to carry the new non-toxic fuel, called AF-M315E. Developed by the Air Force Research Laboratory at Edwards Air Force Base, the new propellant is safer to handle and offers a 50 percent increase in density-Isp, compared to the conventional chemical propulsion systems, such as hydrazine.

AF-M315E burns hotter than hydrazine, requiring new metals to withstand the high temperatures in the thrusters aboard the propulsion system.

The GPIM payload will fly aboard the BCP 100 spacecraft bus, which will provide standard payload interfaces and streamlined procedures for short lead-time and affordable access to space.

Aerojet Rocketdyne is an innovative company delivering solutions that create value for its customers in the aerospace and defense markets. The company is a world-recognized aerospace and defense leader that provides propulsion and energetics to the space, missile defense and strategic systems, tactical systems and armaments areas, in support of domestic and international markets. Additional information about Aerojet Rocketdyne can be obtained by visiting our websites at www.Rocket.com and www.AerojetRocketdyne.com

Ball Aerospace is a subsidiary of Ball Corporation. Ball Aerospace supports critical missions for national agencies such as the Department of Defense, NASA, NOAA and other U.S. government and commercial entities. The company develops and manufactures spacecraft, advanced instruments and sensors, components, data exploitation systems and RF solutions for strategic, tactical and scientific applications. For more information, visit http://www.ballaerospace.com.