Future Flight's main attraction is a virtual reality ride that takes guests on an excursion through deep space to Mars and has them land back on the 50-yard-line of NRG Stadium, home to the Big Game. Guests wear virtual reality goggles for the two-minute, 10-second ride that concludes with a 90-foot drop.

Under NASA's current plan, astronauts will voyage to the Red Planet in the 2030s using the Space Launch System (SLS) rocket - the most powerful rocket ever built. With the initial SLS rocket standing 322 feet tall or 107 yards, and later versions evolving to 364 feet tall or 121 yards, all versions of the SLS will be longer than a football playing field. The SLS is ultimately being designed to provide an unprecedented lift capability of 130 metric tons, comparable to lifting 895 NFL linemen into space.

Four RS-25 engines sit at the bottom of the rocket and will fire non-stop providing more than two million pounds of thrust for 8.5 minutes to make the journey into space. The RS-25 engines previously helped boost NASA's space shuttle to orbit, flying in a configuration of three engines per mission with 135 total shuttle flights over the 30-year shuttle history. Currently, upgraded engines are undergoing tests at NASA's Stennis Space Center in Mississippi to demonstrate the additional capability and higher performance requirements for the SLS missions.

The RS-25 engine, designed and manufactured by Aerojet Rocketdyne, highlights the nation's progress in developing transportation systems for human exploration of deep space.

"Amazing things are happening in America's space program, which is why we wanted to share some of the latest developments with the American public," said Eileen Drake, CEO and President of Aerojet Rocketdyne. "When the Space Launch System launches in 2018, we want the American people to say, ‘I have seen one of the engines powering that rocket.'"

A full-scale RL10 rocket engine, built by Aerojet Rocketdyne, is also on display at Future Flight. The RL10 engine is located in the upper stage of the SLS rocket and provides the main propulsion once the rocket has reached outer space. One RL10 engine will be used on SLS when it makes its inaugural flight in 2018, and four RL10 engines will be used on the first rocket carrying astronauts, which is slated to launch in 2021. Over the last 50 years, more than 475 RL10 engines have played a vital role in launching hundreds of satellites to orbit and sending spacecraft to explore every planet in our solar system.

In addition to the RS-25 and RL10 engines on display, Aerojet Rocketdyne has virtual reality goggles showcasing an RS-25 engine test at Stennis Space Center, as well as space-themed interactive learning activities and educational videos inside the Future Flight pre-ride pavilion.

"Super Bowl LIVE guests will be thrilled with the Future Flight area. The ride, models and interactive exhibits are all space related and tell the story of how our astronauts will make the journey to Mars in the near-future," added Drake. 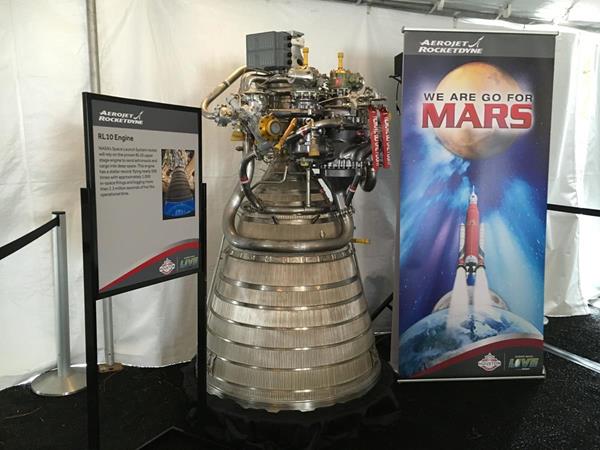 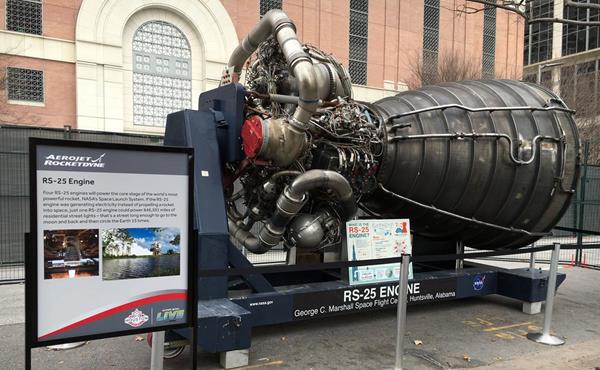 The RS-25 engine, developed and manufactured by Aerojet Rocketdyne, is on display at Future Flight in Houston, TX. Four RS-25 engines will power the core stage of the world's most powerful rocket, NASA's Space Launch System.