Starting last year, Aerojet Rocketdyne resumed RS-25 engine testing to ensure that the engines will withstand the demanding operational environment required by SLS. After today's test, three RS-25 engines have accumulated 5,468 seconds of test time and engine 0528 has been tested for 1,263 seconds.

"As a nation of explorers, we constantly look beyond the horizon, and Mars is the most logical place for humanity to expand our knowledge of the solar system," said Aerojet Rocketdyne CEO and President Eileen Drake. "SLS, powered by four RS-25 engines, is just one of the six essential elements needed for an affordable journey to Mars."

Aerojet Rocketdyne is supporting the propulsion and power requirements for the six elements for Mars: SLS; Orion; solar electric propulsion (SEP); deep space habitats; entry, descent and landing systems; and ascent vehicles. The capabilities exist today for each of these elements.

"For the nation to explore Mars, it is imperative to make each element as affordable as possible, which is why Aerojet Rocketdyne is targeting more than a 30 percent cost reduction in the RS-25 engine from the version that flew on the Space Shuttle," according to Jim Paulsen, vice president for NASA programs at Aerojet Rocketdyne. "We are using the lessons learned from our test firings to further enhance our operational efficiency and reduce costs."

Aerojet Rocketdyne is incorporating the latest advances in manufacturing, processing and materials into its expendable version of the RS-25 engine. Currently, the company has identified 45 components that are candidates for 3-D printing, which could reduce the overall engine manufacturing timeline by 25 percent by eliminating a significant number of welds needed to assemble the engine.

"Our engine testing at Stennis is moving us closer to powering the journey to Mars and introducing a new era of launch technology," added Drake. "In addition to the RS-25 engine testing at Stennis, we also test our RS-68 engine for the Delta IV and the AR1 engine, which is eliminating our nation's dependence on foreign engines for domestic launch vehicles." 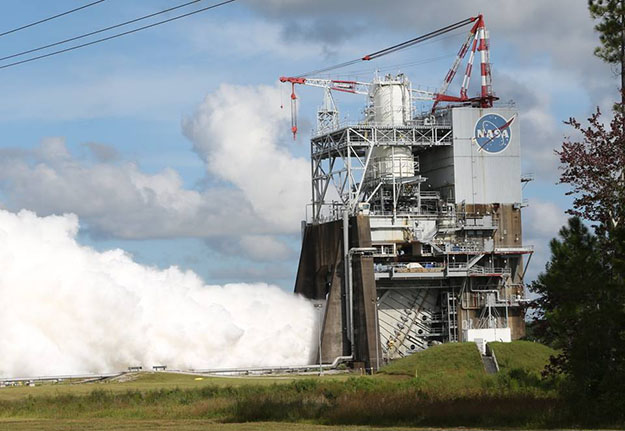