EM-1 is a three-week mission in which the SLS rocket will launch the Orion spacecraft into a distant retrograde orbit around the moon farther than a human-rated vehicle has traveled before, and also will deliver 13 small satellites to deep space.

"The Space Launch System epitomizes our nation's legacy of ingenuity and our spirit of exploration," said Aerojet Rocketdyne CEO & President Eileen Drake. "When it launches, SLS will eclipse the performance of any rocket flying today or currently under development."

All four of the RS-25 engines that will fly during EM-1 also flew during the Space Shuttle Program; however, they have been outfitted with new controllers and adapted for SLS. Each engine provides half a million pounds of thrust, totaling more than 2 million pounds of thrust, for the first stage of the SLS rocket. An infographic about the first four engines and their flight history can be found here.

"These four EM-1 engines have a rich and storied history," said Dan Adamski, RS-25 program director at Aerojet Rocketdyne. "Together, they've powered 21 shuttle flights with the most experienced engine, E2045, having flown on 12 separate flights."

Aerojet Rocketdyne will store the four engines for EM-1 at its facility located at NASA's Stennis Space Center until they are ready for integration with the core stage, which is currently in development at NASA's Michoud Assembly Facility in New Orleans.

In addition to the core stage propulsion for the debut SLS flight, Aerojet Rocketdyne is also providing an RL10B-2 engine for the rocket's upper stage, which is called the Interim Cryogenic Propulsion Stage (ICPS). The RL10B-2 produces 24,750 pounds of thrust and is the main propulsion once the rocket has reached outer space; it gives the Orion spacecraft the final boost to complete its mission around the Moon. Earlier this year, NASA delivered the completed ICPS to Cape Canaveral Air Force Station, Florida, in preparation for integration with the rocket.

"The propulsion for SLS is just one example of how all the pieces for Exploration Mission-1 are starting to come together. It is remarkable that our nation will soon debut this new capability that will enable humans to explore deep space," added Drake. 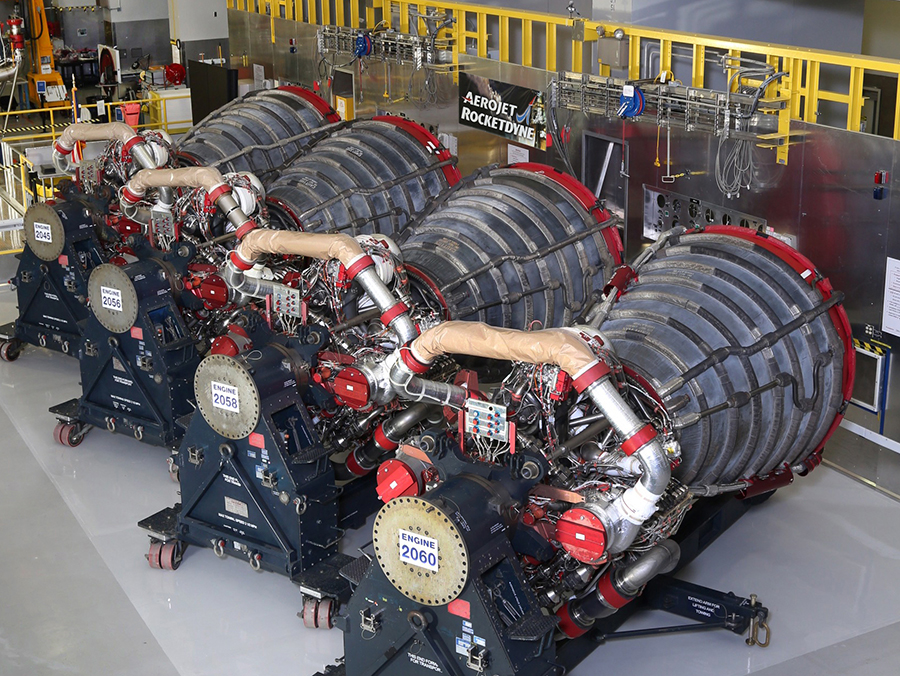