Using two RL10 engines to power the Centaur upper stages of Atlas rockets was the norm for decades, beginning with the first successful Atlas launch in November 1963. The last dual RL10 engine Centaur took flight in August 2004 during the final launch of the Atlas II rocket family. 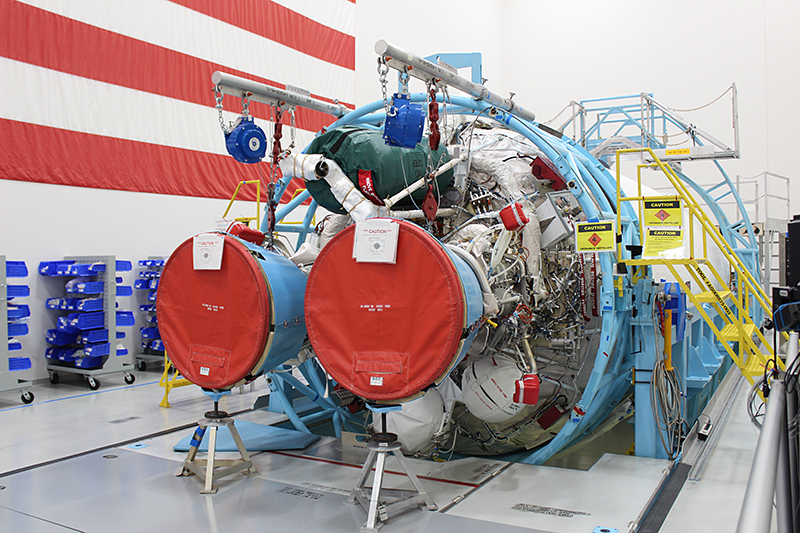 A Centaur upper stage powered by two RL10 engines will fly atop an Atlas V rocket on missions to deliver U.S. astronauts to the International Space Station. Photo courtesy of United Launch Alliance.

The contemporary version of the Atlas rocket, known as the Atlas V and built by United Launch Alliance, has notched an impressive record of 80 successful launches in a row. All of these launches included a Centaur upper stage powered by a single RL10 engine.

Aerojet Rocketdyne will supply two RL10A-4-2 engines for each Starliner mission to power the Centaur upper stage that will fly atop the Atlas V launch vehicle. The RL10A-4-2 configuration has been in production since 2002 and has more than 50 flights under its belt.

A common assumption is that the second RL10 engine is required because Starliner is much heavier than a typical Atlas V payload and requires extra thrust to get the spacecraft and its crew to the International Space Station. While that seems like a sound explanation, that is not the case here! A single RL10 has plenty of punch to place payloads of similar size and weight into orbit without assistance. Using two RL10 engines to power the Centaur is really all about keeping the astronauts safe during their entire ascent to orbit.

Let’s break it down:

During an abort scenario where a problem is detected with the launch vehicle at high altitudes, Starliner’s four, 40,000-pound-thrust Launch Abort Engines and 12 aft-facing Orbital Maneuvering and Attitude Control (OMAC) engines, each packing 1,500 pounds of thrust, both made by Aerojet-Rocketdyne, would fire in a split second to propel the capsule and crew away from the launch vehicle in order to reenter Earth’s atmosphere and land safely via parachutes.

The additional thrust provided by two RL10 engines enables Starliner to follow a flatter ascent trajectory with more horizontal velocity and less vertical velocity during its climb to orbit. The Starliner’s shallow trajectory reduces the g-loads to the crew in the event of an abort, which enables the crew to safely abort the mission at any point during the launch. It also allows the Atlas V booster stage to fly a lower thrust profile during high-acceleration phases of the mission, keeping sustained g-forces on crew members to a much safer and more comfortable 3.6 Gs.

The first crewed launch of Starliner will also mark the first time an RL10 engine is used to launch people into space, which is a significant milestone considering the RL10 program has been operational for more than five decades, with nearly 500 engines flown in space.

There have been seven major upgrades of the RL10 engine over the years aimed at maintaining the engine’s outstanding reliability while increasing its performance. Today, the RL10 team is working to qualify a new version of the RL10 that incorporates a 3D-printed thrust chamber assembly built from a copper alloy to help reduce production lead times and cost.

In addition to the RL10, OMAC and Launch Abort Engines, Aerojet Rocketdyne will provide two AJ-60A solid rocket motors to help propel the Atlas V off the pad and the full suite of thrusters needed to control the Centaur upper stage. The company will also support Starliner with 20 service module orbital maneuvering and attitude control engines, 28 service module reaction control system engines as well as a host of composite overwrapped pressure vessels to support the spacecraft and launch vehicle.

From small to large, Aerojet Rocketdyne’s propulsion systems stand ready to support the effort to once again launch U.S. astronauts to space from American soil.