Manufacturing Engineer Dwain H. knows Camden, Arkansas, better than many. He grew up here, raised by a father who exemplified the importance of strong family ties and hard work and a mother who demonstrated how to persevere during adversity. He was always curious, participating in many math and science fairs while growing up. He describes his drive to always “figure out how things worked and how I could make them work better” as what inspired him to become an engineer. 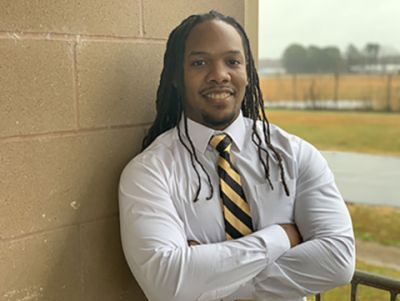 The foundation for his commitment to giving back to his community started young, when he participated in similar programs that he volunteers for now. One program he volunteers with, “Go to High School, Go to College,” guides and supports local Camden High School students through making the transition to college. Another organization that Dwain is passionate about is his fraternity, Alpha Phi Alpha Fraternity Inc., the first intercollegiate Greek-letter organization established for African American men, which he joined at Arkansas State University.

He uses his experience in the rigorous engineering track at Arkansas State to guide young people who are interested in a Science, Technology, Engineering and Mathematics (STEM) field: “Stick with it; it may get a little rough in college but stay with it. Learn how to ask questions.” After college, Dwain wanted to stay close to home and Aerojet Rocketdyne presented a perfect opportunity at its Camden site.

Dwain has worked for Aerojet Rocketdyne going on four years and he brings his commitment to service to the Camden site every day. “It’s a great feeling, that sense of accomplishment at the end of the day after tackling a challenge. Knowing I’m a part of something larger that is making a difference and ultimately saving lives gives me pride in what I do.” His team, who he says has become a work family, helps each other succeed and support the Aerojet Rocketdyne mission.

One aspect of his job that Dwain is passionate about is using his leadership role to implement new technologies and tools in the ever-evolving engineering field, “to develop ways to ensure that we continue building quality products efficiently and safely.”

Dwain is Camden Strong and is part of the reason why Camden is such a great place to work. His drive to give back to his community inspires those around him. He is supported by his high school sweetheart, now wife and Doctor of Physical Therapy, Brittany. In his free time, you can find Dwain watching WWE and the Pittsburgh Steelers in between watching movies with his wife, and wrestling and singing Elmo songs with his son Jaden.