Aerojet Rocketdyne’s R-4D engine: From Apollo to Orion and beyond

The Apollo service module was outfitted with four reaction control clusters around its circumference, each containing four R-4D thrusters.

While this contract is a new venture for Aerojet Rocketdyne, the Dual Mode HiPAT™ engine is a variant of the flight-proven R-4D, which is no stranger to space. The R-4D was originally developed for the Apollo program and was employed on every mission to the Moon.

“The Dual Mode HiPAT™ engine program will provide the Space and Missile System Center with the sixth generation of the venerable R-4D engine,” said Ken Young, general manager of Aerojet Rocketdyne’s Redmond operations. “There have been more than 900 R-4D engines flown in space since the 1960s with 100% mission success. There has never been an R-4D failure, including during the daring Apollo 13 rescue mission, during which the service module’s R-4Ds were used extensively to help control the spacecraft on its perilous journey home.”

In addition to Apollo, notable missions include the 1984 LeaSat 1 – the first Hughes geosynchronous satellite to use a liquid propulsion system incorporating a single R-4D; the Cassini mission to Saturn which employed two main R-4D engines; NASA’s Solar Dynamics Observatory mission to the Sun; the ATV and HTV resupply vehicles for the International Space Station; hundreds of geosynchronous telecommunication satellites for the U.S., Europe and Japan; and LADEE (Lunar Atmosphere & Dust Environment Explorer), a mission that returned an R-4D to the Moon 42 years after the first Apollo R-4D visit. 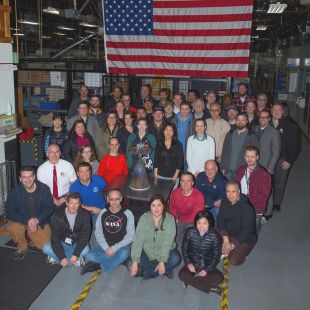 Members of Aerojet Rocketdyne’s Orion team in Redmond, Washington, with one of the Auxiliary engines for the Artemis 2 Orion Service Module.

“While I am extremely proud of our company’s history of providing critical propulsion for the global space industry, I’m equally proud of the impressive progress we’ve made in positioning Aerojet Rocketdyne as the propulsion supplier of choice for future U.S. missions,” said Jim Maser, Aerojet Rocketdyne’s senior vice president for Space.

Orion, NASA’s next generation human-rated spacecraft, will employ a version of the R-4D for its auxiliary engines, which will provide critical maneuverability and propulsive support for the spacecraft’s service module. Currently being flight delta-qualified for Space and Missile System Center, Aerojet Rocketdyne’s next generation Dual-Mode HiPAT™ engine is an extremely robust and high performing bipropellant apogee engine that will enable more capable and reliable commercial and government satellite programs.