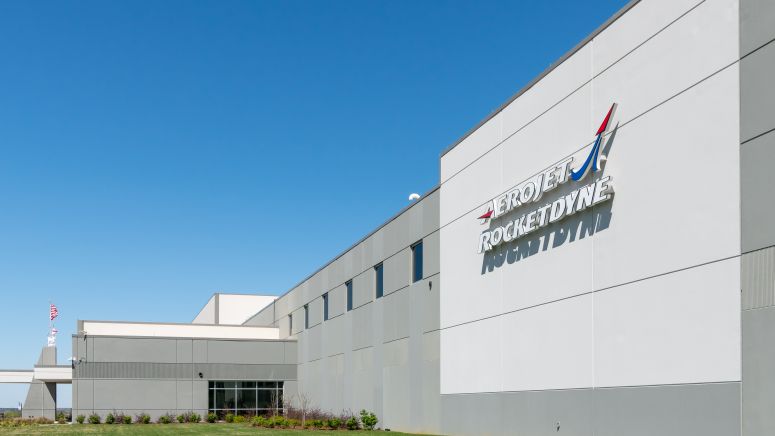 August 1, 2022 - HUNTSVILLE, Ala. – To get a quick sense of how busy things have gotten at Aerojet Rocketdyne’s three-year-old Advanced Manufacturing Facility (AMF) here, take a look at its jam-packed parking lot.

The time of day doesn’t much matter, because the 136,000-square-foot AMF is running three worker shifts to churn out propulsion hardware for six major programs, compared to two shifts when it opened in 2019. A look inside the plant, which makes solid rocket motor cases and related hardware for critical U.S. defense and space programs, provides a bit more detail.

“We’ve recently installed and qualified a new medium case winder for additional capacity and redundancy and we have qualified several curing ovens for flexibility across programs,” said Gilbert Goscicki, Aerojet Rocketdyne’s AMF site lead. “We continue to grow our equipment base with new large lathes that will be coming in by the end of the year to support our large case production.”

The AMF, which officially celebrated its 3rd anniversary June 7, is a cornerstone of a major Aerojet Rocketdyne expansion in the Huntsville area – home to the U.S. Army Space and Missile Defense Command, major programmatic activities of the U.S. Missile Defense Agency, and NASA’s Marshall Space Flight Center. The facility was built to Aerojet Rocketdyne specifications by the Huntsville-Madison Chamber of Commerce’s Industrial Development Board, which leases it back to the company.

Chip Cherry, president and CEO of the chamber, noted Aerojet Rocketdyne’s longtime presence in Huntsville, and called the AMF the “icing on the cake” following the company’s 2016 decision to locate its defense business in Rocket City. “Standing that up demonstrated our ability to support companies doing cutting-edge things in aerospace with advanced materials and processes,” he said.

With 400 aerospace and defense companies in the Huntsville area, the AMF enjoys close proximity to both its suppliers and customers, Cherry said. “The ecosystem here is consistent with what they need, and it’s a good fit for us,” he said. “It reinforces our position as one of the key aerospace and defense places in the U.S.”

Renee Knight, Aerojet Rocketdyne’s Human Resources business partner in Huntsville, said, “When the AMF first opened, it was staffed by 30-35 people, many of them transfers from other company locations. The current headcount is 230, the vast majority of them are local hires.”

And the AMF workforce continues to increase. “We’re seeking talented individuals looking for growth opportunities to join our team,” she said.

“Although the AMF is busier than ever, there is still room for growth, and plans are in place to accommodate that,” Goscicki said.

“The team is really coming together, accomplishing significant targets and milestones, and working in a very innovative fashion,” Goscicki added. “The AMF is a very engaging and fun place to work. There is high drive and lots of initiative and the team is very much behind our mission – powering defense through composite case manufacturing.”