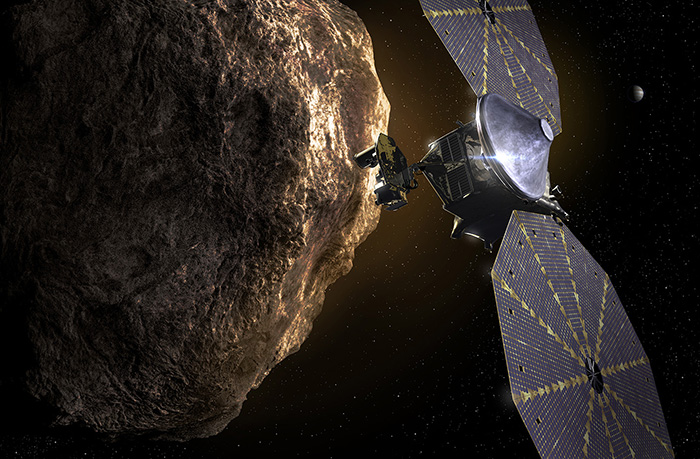 July 2021 – NASA’s Lucy mission, named after the 3-million-year-old skeleton that gave scientists unparalleled insight into human evolution, will provide a glimpse into the formation of our solar system by studying the Trojan asteroids in Jupiter’s orbit when it launches later this year.

NASA is slated to launch the Lucy spacecraft in October 2021 atop an Atlas V 401 rocket from Cape Canaveral in Florida. Aerojet Rocketdyne is providing the engines for the Lockheed Martin-built Lucy spacecraft, which includes eight MR-103J thrusters and six MR-106L thrusters. Science for the mission will be led out of the Southwest Research Institute.

Trojans are asteroids that share the same orbit as Jupiter, one cluster leading the planet’s orbit around the Sun and the second following equidistantly behind. Due to their distance from Earth, beyond the main asteroid belt, we know very little about Trojan asteroids. Lucy is aiming to change that.

“Lucy is another exciting NASA mission that will enable us to better understand the formation of our solar system,” said the company’s Senior Vice President of Space Jim Maser. “Our thrusters will play an essential role in steering Lucy as it explores eight different asteroids during its 12-year primary mission.”

Lucy’s observations of eight different asteroids over this 12-year mission include one main belt asteroid and seven Trojan asteroids. This ambitious mission is planned to achieve many firsts: 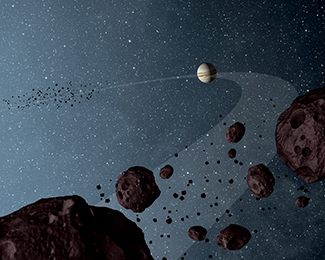 Such a revolutionary mission calls for an equally impressive spacecraft, and Lucy doesn’t disappoint. Lucy is a solar-powered spacecraft with large solar panels flanking its body. With its panels fully extended, Lucy measures more than 50 feet tip to tip – that’s as tall as a five-story building! Lucy’s instruments are equally notable, including a thermal emission spectrometer that will measure the surface temperature of the asteroids and a multi-spectral camera that will take color images of the Trojans to help determine their composition.

In addition to providing engines on the spacecraft, Aerojet Rocketdyne is also supplying propulsion and tanks on the Atlas V launch vehicle that will launch Lucy, including:

To learn more about the Lucy mission, visit www.nasa.gov/lucy.