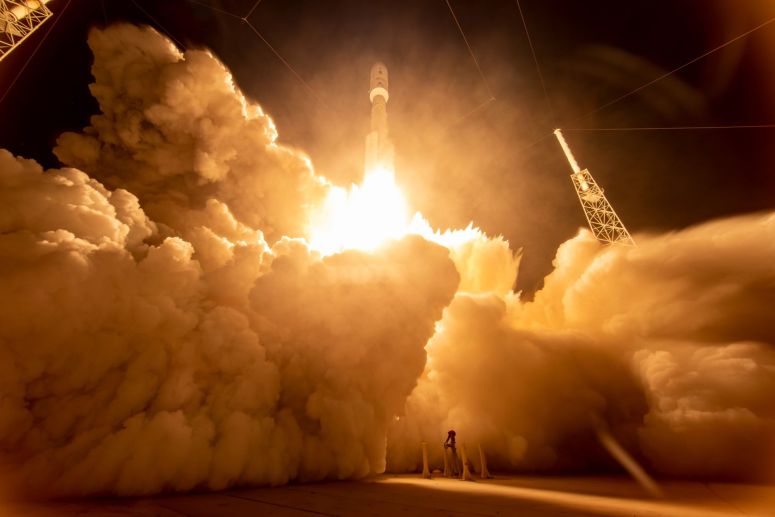 Dec. 7, 2021 – Aerojet Rocketdyne’s RL10 has been powering our nation’s space exploration and national security missions for more than half a century. One of the reasons this engine has stood the test of time is its incredible reliability and its extremely high performance.

Most recently, the RL10 engine flexed its might by supporting the launch of the Space Test Program (STP)-3 mission for the U.S. Space Force, which launched aboard a United Launch Alliance Atlas V rocket from Cape Canaveral Space Force Station in Florida on Dec. 7. This was the 90th Atlas V launch and the 35th flight of the RL10C-1 configuration. Additionally, this was the longest mission duration to date for an Atlas V rocket with a total mission elapsed time of eight hours and eight minutes.

Known a rideshare mission, the STP-3 payload included the Space Test Program Satellite 6 (STPSat-6) along with several other small satellites. Given the multiple payloads, the deployment sequence required three RL10 burns to deploy the various spacecraft in the correct Geosynchronous Equatorial Orbital (GEO) locations. Having the capability to restart the RL10 engine multiple times during a single mission enables the Atlas V’s Centaur upper stage to accurately deliver payloads to meet the most challenging mission requirements.

“For more than 50 years, the RL10 has been the nation’s premiere high-performance upper stage rocket engine and it has achieved an unmatched record of success,” said Jim Maser, senior vice president of Aerojet Rocketdyne’s Space Business Unit. “Supporting the U.S. Space Force and other customers with the RL10 enhances our national security and pushes the boundaries of space exploration.”