March 2021 - Getting to Mars takes propulsion systems of all shapes and sizes, but one thing they nearly all have in common is Aerojet Rocketdyne.

Beginning more than four decades ago with the Viking 1 and 2 orbiter/lander missions, NASA has relied on Aerojet Rocketdyne to propel its Mars missions – from launch, to landing and everything in between. These missions have ranged in scale from the 25-pound Mars Pathfinder rover, to the most recent visitor, the 2-ton Perseverance rover, and will continue with the even larger Mars Sample Return mission. 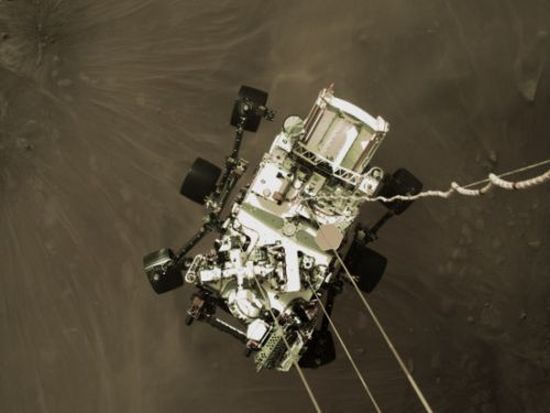 Perseverance Rover being lowered to the surface of Mars on February 18. Credit: NASA/JPL

Aerojet Rocketdyne propulsion was equally critical to the entry, descent and landing portion of the mission. Eight MR-107U thrusters stabilized the spacecraft during its entry into the Martian atmosphere; and eight MR-80B throttling thrusters on the descent stage helped slow the spacecraft’s descent and enabled the Sky Crane to hover as it lowered the rover onto the planet’s surface. The Sky Crane was equipped with two composite overwrapped pressure vessels (COPVs) built by Aerojet Rocketdyne subsidiary ARDé.

Now that Perseverance rover is safely on the surface of Mars, it has begun its roughly two-year sample collection mission. Aerojet Rocketdyne provides the Multi-Mission Radioisotope Thermoelectric Generator (MMRTG) that powers the rover and its instruments throughout surface operations.

One of Perseverance’s objectives is to search for evidence of past life and collect and cache Martian soil samples for return to Earth on a future mission. 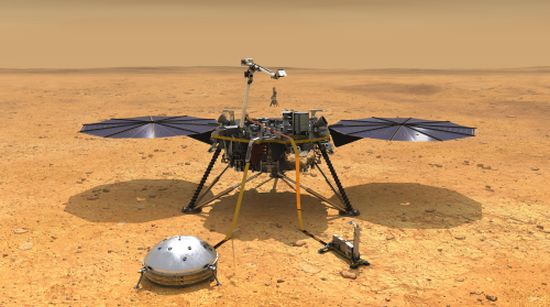 This illustration shows NASA's InSight spacecraft with its instruments deployed on the Martian surface. Credit: NASA/JPL-Caltech

InSight’s cruise-phase thrusters – four Aerojet Rocketdyne MR-111C and four MR-106E engines – put InSight on a direct course to Mars, performing four additional burns to fine tune InSight’s trajectory as it approached Mars. Twelve MR-107 engines then worked in coordination with a parachute system to ease the craft down to the surface. Just prior to touchdown, the engines moved the lander laterally to keep it clear of the jettisoned parachute.

InSight began its journey May 5, 2018 with its launch from Vandenberg Air Force Base, California, aboard a United Launch Alliance Atlas V rocket. Aerojet Rocketdyne supplied the RL10C-1 main engine and 12 MR-106 reaction control thrusters for the rocket’s Centaur upper stage, as well as helium pressurization tanks for the vehicle’s first and second stages. 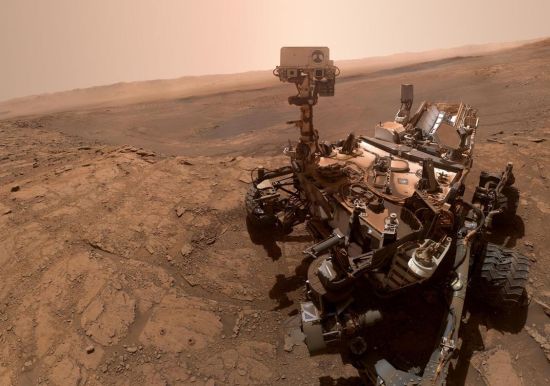 MARS SCIENCE LABORATORY / CURIOSITY ROVER – 2012: Curiosity, which touched down with the help of Aerojet Rocketdyne propulsion in August 2012, continues to traverse the Martian surface courtesy of an Aerojet Rocketdyne-supplied MMRTG. Similar to the recently landed Perseverance rover, Curiosity rover was lowered to the surface of Mars by Sky Crane, enabled by Aerojet Rocketdyne entry and descent engines – MR-107U and MR-80B thrusters, respectively. 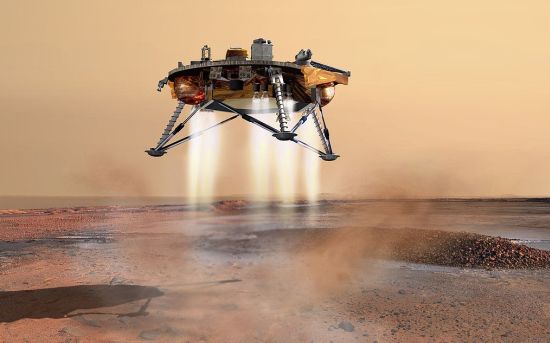 Animation of the Mars Phoenix lander descending to the surface by Aerojet Rocketdyne propulsion. Credit: NASA/JPL

PHOENIX MARS LANDER – 2008: Aerojet Rocketdyne engines on the Phoenix lander enabled its powered landing on Mars on May 25, 2008. The Phoenix landing, the first successful actively-guided descent onto the Martian surface since 1976, used 12 MR-107 engines in coordination with a parachute system to guide the spacecraft to the surface. Just like with InSight, the engines moved the lander laterally to keep it clear of the jettisoned parachute just prior to touchdown.

Aerojet Rocketdyne provided mission-critical propulsion for all phases of the voyage ranging from launch, cruise and for the smooth landing onto the northern polar region of Mars. Similar to InSight’s mission, eight cruise engines guided the spacecraft throughout its cruise phase. Phoenix was launched aboard a Delta II rocket in August 2007 with help from Aerojet Rocketdyne’s RS-27 and AJ-10 liquid engines. 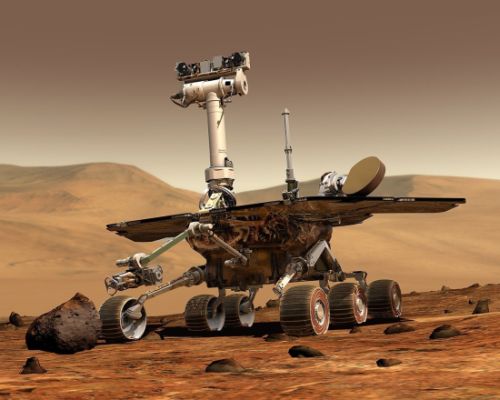 MARS EXPLORATION ROVERS SPIRIT AND OPPORTUNITY – 2004: In January 2004, Spirit and Opportunity landed on opposite sides of Mars and trekked for miles across the Martian surface, conducting field geology and making atmospheric observations. Both rovers exceeded their planned 90-day mission lifetimes by many years. Spirit operated for nearly six years and Opportunity for an impressive 15 years.

Spirit and Opportunity were launched atop of Delta II rockets powered by Aerojet Rocketdyne RS-27 and AJ10 liquid engines in June and July 2003, respectively. They were then guided through space by Aerojet Rocketdyne MR-111C cruise thrusters. Each rover landed on the red planet via airbag systems which encapsulated the landing crafts.

This 8-image mosaic is of Sojourner, NASA's first rover on Mars. Credit: NASA/JPL

MARS PATHFINDER MISSION (SOJOURNER ROVER) – 1997: The Mars Pathfinder mission landed on Mars on July 4, 1997. The mission was comprised of the Pathfinder lander and the first ever rover to visit the planet, Sojourner. The mission was a technology demonstration to prove the new “airbag” landing technique would work on Mars, and it was a success.

The mission was launched atop a Delta II rocket powered by Aerojet Rocketdyne RS-27 and AJ10 liquid engines in December 1996. Pathfinder was then guided through space by Aerojet Rocketdyne MR-111C cruise thrusters before landing on the red planet via airbag systems which encapsulated the lander. 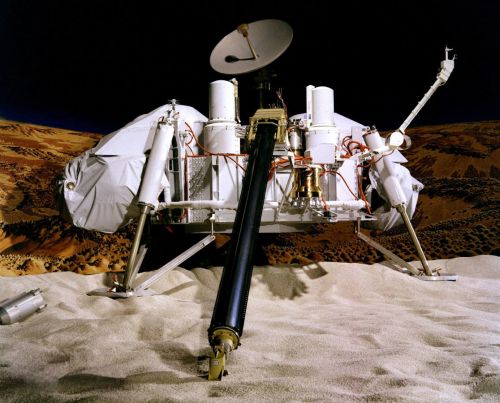 Photo of a model of the Viking landers. Credit: NASA

VIKING 1 AND 2 – 1976: NASA's Viking landers became the first successful landings of spacecraft safely on the surface of Mars. Two identical spacecraft, each consisting of a lander and an orbiter, flew together and entered Mars’ orbit before the landers separated and settled in different locations on the planet’s surface. Viking 1 operated on Mars for 6.5 years and Viking 2 operated for 4.5 years. The orbiters operated until 1980 and 1978, respectively.

Aerojet Rocketdyne provided propulsion for the mission’s cruise phase as well as the powered descent on Mars. The three MR-80 descent engines on each Viking craft had single thrust chambers with 18 nozzles each, which prevented kicking up dust on the surface and contaminating the lander and Mars soil erosion concerns. The MR-80 has since been updated to an engine with a single nozzle and a higher thrust range that was used on the Sky Crane for both Curiosity and Perseverance’s landings.

Both Viking missions were launched aboard Titan IIIE rockets that included propulsion systems provided by Aerojet Rocketdyne legacy companies. These include the 5-segment strap on solid rocket booster motors, the LR87-11 and LR91-11 liquid engines that powered the first stage and second stages, respectively, and the RL10A-3 engines that powered Centaur upper stage. 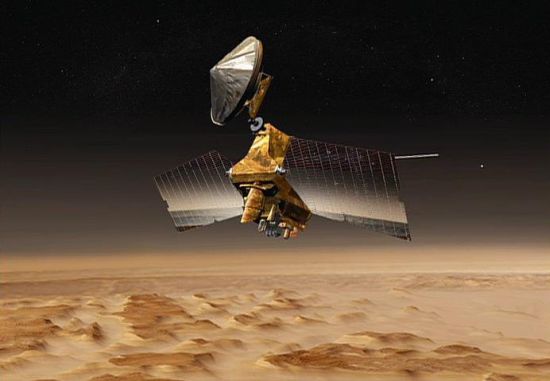 NASA's Mars Reconnaissance Orbiter arrived in Mars Orbit in 2006 and has been operational for more than fifteen years. Credit: NASA

ORBITERS: In addition to playing a role on every mission that landed on Mars, Aerojet Rocketdyne has also provided propulsion for nearly every successful NASA Mars orbiter mission:

LOOKING FORWARD, Aerojet Rocketdyne is anticipating supporting the JPL-led Mars Sample Return mission, which will send samples collected by Perseverance rover back to Earth to be studied. The mission would use a combination of robotic systems to collect the samples and an ascent rocket to launch the samples off the planet. In discussion for supporting the mission are Aerojet Rocketdyne cruise, entry and descent engines.

Aerojet Rocketdyne is laying the groundwork for eventual human missions to Mars. The company is developing the solar electric propulsion system for NASA’s Lunar Gateway, work that will help pave the way for a larger system to deliver cargo in support of crewed missions to Mars, and has performed design work on nuclear propulsion systems that would dramatically reduce astronaut transit times to the red planet.

While human missions to Mars are many years away, Aerojet Rocketdyne is taking the necessary steps to be ready when the time comes. From the small robotic explorers of the relatively recent past, to the astronaut missions of the future, Aerojet Rocketdyne’s products are as integral to exploring Mars as its initials are to the spelling of the word.