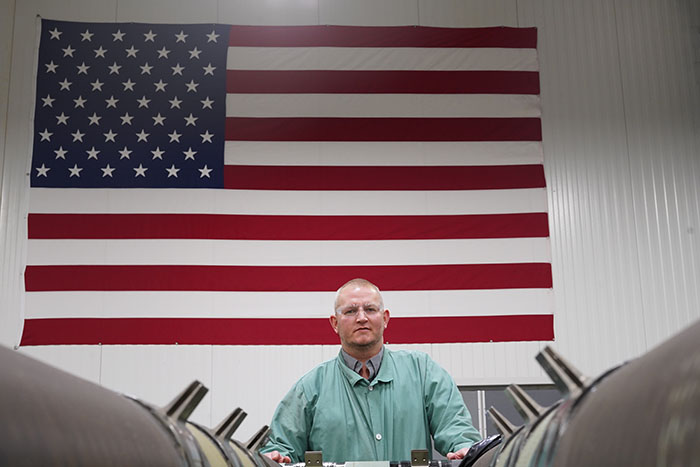 As a manufacturing engineer manager at Aerojet Rocketdyne, Dave leads the PAC-3 MSE propulsion engineers at the company's Camden site

November 10, 2022 - After seeing first-hand how important safe and reliable weapons are in combat, former Air Force officer Dave B., now a manufacturing engineer manager at Aerojet Rocketdyne, does his part every day to support today's warfighters with dependable defense propulsion from Camden.

Currently an Air Force Reservist, Dave has served in the Air Force on active duty and in the reserves for more than 20 years. Dave felt called upon to join the military as he had earned a degree in mathematics shortly after the Sept. 11 attacks and felt his unique skills would be beneficial during a time of turmoil and uncertainty.

"Like many Americans, I was angry. I wanted to help in any way I could, so joining the Air Force just felt like the right thing to do after 9/11," said Dave. "And it was the easiest decision I've ever made."

Dave in Bagram, Afghanistan in 2006 as a Combat Weapon and Tactics Analyst for the Air Force

Dave served as a Combat Weapons and Tactics Analyst, where he gathered data while embedded with Joint Tactical Air Controllers, to determine the optimal processes and weapon choices for close air support when troops were in close contact with the enemy. Some of the weapons Dave used in combat were powered by propulsion manufactured at Aerojet Rocketdyne's Camden site.

In April 2012, Dave joined Aerojet Rocketdyne as a quality engineer on the Javelin program in Camden. He is now a manager leading manufacturing engineers supporting various production programs as well as research and development. Dave and his team improve motor manufacturing processes, ensuring the company's high quality products are safely produced and delivered on time.

Aerojet Rocketdyne provides the dual pulse motor, attitude control motors, and lethality enhancer for the PATRIOT Advanced Capability-3 Missile Segment Enhancement (PAC-3 MSE), produced by Lockheed Martin. Dave has worked on the PAC-3 program for more than six years and doesn't see himself leaving it anytime soon. "PAC-3 propulsion is my baby, and my team and I have brought it to where it is today," said Dave.

Working for a company like Aerojet Rocketdyne was Dave's goal after experiencing combat and handling the very weapons that aerospace and defense companies manufacture. Just as the people of Aerojet Rocketdyne supported Dave and his unit with reliable weapon propulsion, Dave knew he wanted to do the same for the next generation of warfighters.

"There's no way to describe how proud I am to tell people where I work. I've been there, boots-on-the-ground, going through exactly what warfighters are going through now," said Dave. "I feel immeasurable pride knowing I can still provide support to the men and women on the ground and do my part to make sure they can come home safely."