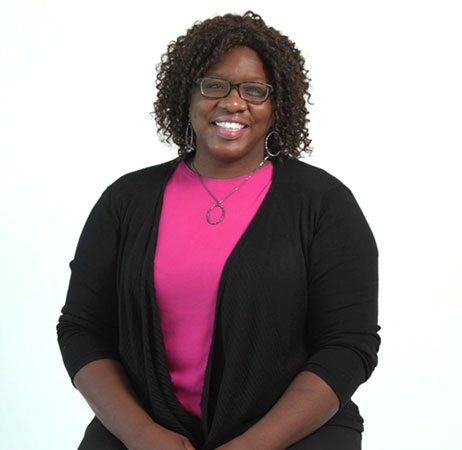 December 2021 - Necessity is said to be a mother of invention. For Angela Curry, necessity was a mother of re-invention.

And, for that, she has been honored by the University of Alabama in Huntsville (UAH) as the 2021 Alumni of Achievement Award winner for the College of Arts, Humanities and Social Sciences.

“I have a passion for humanity and our society,” Angela said. “This is very humbling and an honor.”

Angela, a member of the configuration management division of Aerojet Rocketdyne in Huntsville, is the founder and executive director of the nonprofit organization, United Women of Color (UWOC). The organization’s mission is to empower girls, women and their communities by uniting people across ethnicities to address civic and educational gaps for advancement.

When she interviewed for a technical writer position at Aerojet Rocketdyne (she joined AR in January 2018), Angela let the company know that it would be getting more than the typical technical writer.

“I said I was pretty active in the community,” Angela said. “But I won’t let it affect my work.”

She said that it was one of the best interviews she ever had.

“This is one of the best jobs ever,” Angela said. “To actually find a permanent job with a company like Aerojet Rocketdyne is a dream come true!”

Angela was an honor student in high school and earned an academic scholarship to Alabama A&M University where she also walked on to become a member of the track team. After taking a break from school to raise her daughter, she returned to UAH and majored in political science. It was through her professor, Dr. Andree’ Reeves, that she was led to community work.

“It was the first time I’ve ever followed my heart and didn’t do what was logical,” Angela said.

After first working in social work, Angela said that she had an inclination toward engineering (“I’m a detailed person”) and she enjoyed writing (“I like to write and be succinct”). That led to her career course-change from engineering to technical writing.

“I researched technical writing to see what it entailed and I created a writing template,” Angela said. “I kind of re-invented myself.”

It was also during this time that her passion to help the community was rekindled. Reflecting on her experience, she knew there were women in the community who needed a helping hand.

“Being a technical writer has enabled me to take those skills and put them to work in the nonprofit arena,” Angela said. “Several ladies and I came up with the concept over several months – to empower women and create harmony among different ethnicities.

Angela said that such an organization was not around to help her years ago. It’s now “empowering” to see how UWOC is helping women.

“We affect multiple generations,” Angela said. “To see the younger kids knowledgeable about current events makes me hopeful about the future.”