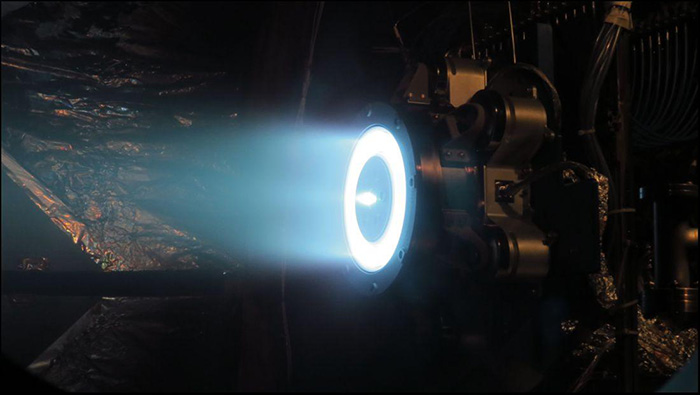 August 2021 – Aerojet Rocketdyne’s Advanced Electric Propulsion System (AEPS) thruster that will be employed on the Power and Propulsion Element (PPE) for NASA’s international lunar Gateway recently completed development testing. The next milestone for the program will be the PPE Preliminary Design Review in October. Three 12 kilowatt (kW) AEPS thrusters will serve as the primary source of propulsion on the PPE to enable orbit transfer and in-space maneuvering.

An important element of NASA’s Artemis program, the Gateway, will serve as a staging point for human exploration operations in the lunar vicinity and deep space. The AEPS thrusters will propel the integrated PPE and Habitation and Logistics Outpost (HALO) in a 10-12 month lunar transfer orbit, which will eventually insert the spacecraft into a near rectilinear halo orbit (NRHO) around the Moon.

“The completion of development testing for the AEPS thrusters is an important milestone in the Gateway program that brings the international space community one step closer to establishing a sustainable and ongoing presence at the Moon,” said Aerojet Rocketdyne Executive Director of Space Joe Cassady.

Aerojet Rocketdyne conducted a series of tests at NASA’s Glenn Research Center and Jet Propulsion Laboratory over the past year on two AEPS thrusters concurrently to achieve the testing goals in a shorter period of time. The AEPS thruster design met all of its test objectives.

The development testing consisted of a variety of environmental and wear tests to ensure that the thruster can withstand the harsh environments it will experience during launch and operation, including hot fire, shock, thermal vacuum, and vibration tests. With development testing complete, the next steps are to complete the qualification process and assemble the flight units for PPE. Aerojet Rocketdyne anticipates manufacturing the flight units for the mission concurrently with qualification testing.

The thruster operates at 12 kW – more than twice the power level of electric thrusters flown on satellites today – producing a higher thrust output for maneuvering and station-keeping. Capable of producing 60 kW of power, the PPE will be nearly three times more powerful than any existing spacecraft using solar electric propulsion. “This is the start of a new era of space mobility that will demonstrate the ability to move larger objects over farther distances in space,” Cassady continued. 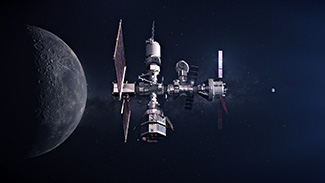 The PPE-HALO will be assembled and integrated at NASA’s Kennedy Space Center before a planned launch in November 2024. The AEPS thruster was developed at Aerojet Rocketdyne’s facility in Redmond, Washington as part of NASA’s Space Technology Mission Directorate and its Solar Electric Propulsion project, which is developing critical in-space electric propulsion technologies for ambitious new science and human exploration missions.