On March 18, 2021, four Aerojet Rocketdyne RS-25 engines on the first Space Launch System (SLS) core stage ignited in unison and flawlessly executed a full-duration 499.6 second hot-fire test that simulated the profile of an actual SLS flight, including throttling and gimbaling sequences. This was the most challenging test to date for the SLS program and key to returning astronauts to the Moon and eventually sending them on to Mars.

Immediately following the successful core stage hot-fire test, the Aerojet Rocketdyne team went straight to work drying and refurbishing the engines for the first flight of SLS that will launch NASA’s Artemis I mission.

“It took 29 days from the time the RS-25 engines shut down following the green run test until we had them dry, refurbished and ready to ship,” said RS-25 Field Integration Lead Engineer Bill Muddle. “The team took great pride in ownership to help make this happen. We have a great set of engines integrated with the SLS core stage that are ready to support the Artemis I Launch.” 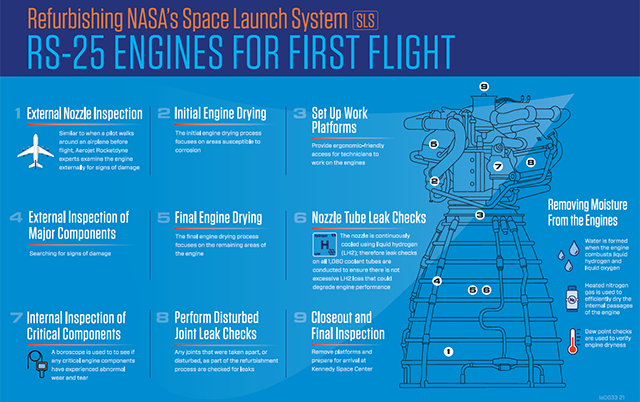 Following refurbishment activities and final shipping preparation, the core stage was loaded onto the Pegasus barge for a 900 mile journey to NASA’s Kennedy Space Center (KSC). Now that the core stage has arrived at KSC, the rocket can begin stacking for the first Artemis I launch inside the iconic Vehicle Assembly Building in Florida. 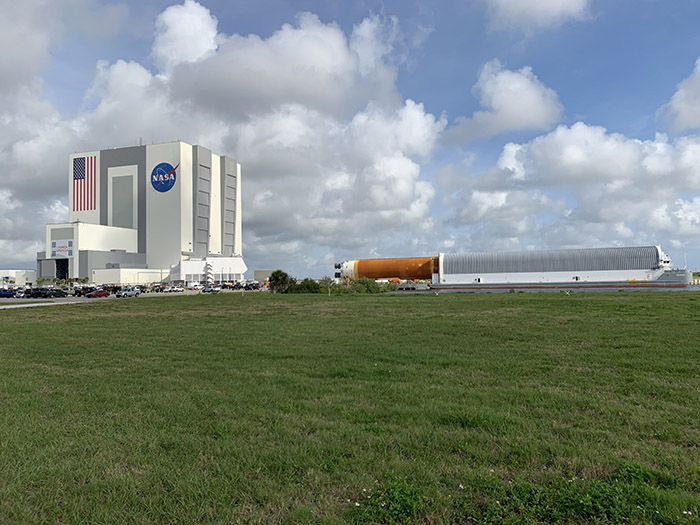 The first core stage for NASA’s Space Launch System rocket is unloaded from the Pegasus barge at NASA’s Kennedy Space Center in Florida on April 29, 2021

“Our team worked around the clock to support the historic hot-fire test and refurbish the engines in preparation for the Artemis I mission. We take great pride in these accomplishments and the critical role we play supporting NASA’s mission to return to the Moon,” added RS-25 Program Director Jeff Zotti.

Aerojet Rocketdyne is a key enabler of propulsion for the Artemis I mission. In addition to the four RS-25 engines that power the SLS rocket during the first 8.5 minutes of flight, Aerojet Rocketdyne also built the RL10 engine that powers the Interim Cryogenic Propulsion Stage built by United Launch Alliance and Boeing, as well as a suite of propulsion for the Orion spacecraft built by Lockheed Martin, and the jettison motor that sits at the very top of the rocket. The jettison motor pulls the launch abort system off the crew module to allow the Orion spacecraft and European Service Module with an Aerojet Rocketdyne orbital maneuvering engine to continue its journey around the Moon. Once the mission is complete and after splashdown, Orion’s self-righting flotation system inflates five air bags with helium stored in tanks built by Aerojet Rocketdyne subsidiary, ARDÉ.